For those of you in Chicago- how about that storm Wednesday night?  Frightening, wasn’t it?  Well, your humble designer was out in it to improve my knowledge of rugs!  There was a trade event designed to enlighten us on some new rugs from India and Tibet.  I was able to get there but because of the weather- I was the only one that showed.  So, thanks to the gracious hospitality of the host I got a first-hand look at these rugs and learned some cool stuff (well, we were sort of stuck where we were anyway with tornado sirens going off).  In true Midwestern fashion, we just made the best of it.  I got to see some fabulous new rugs made of silk and aloe (yes, that stuff you use when you’re sunburned!) some hemp rugs, hair-on hide rugs (actual cow hide with hair)

and some incredibly silky alpaca rugs.  The alpaca are kind of like a Flokati rug (think ’70’s long shag rugs made of wool) but they’re so soft and silky you’ll just want to roll all over them, clothing optional.  The colors of the silk and wool that are available are stunning and so numerous you can create whatever color combination your heart desires- not to mention pattern.  You can actually create your own design and have it made to your specific size and get it in a few months.  Most of these rugs didn’t adhere to what you would consider to be a traditional “Oriental” rug.  They had a more contemporary feel to them with geometric designs, but I could easily see how they could lend an elegant, sophisticated look to a more traditional room. 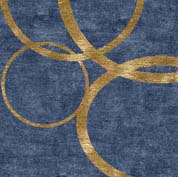 I also got to see a video of the creation of the rugs, from the initial unprocessed wool, through the completed rug being burned ( a guy actually had a blowtorch that he was passing over the rug to singe off some of the stray fibers) to the rugs being washed, stretched and dried.  For anyone who’s ever been afraid of getting their rugs a little wet- you’d be amazed at the washing process.  They saturate the rugs with water using a hose, and then they have these paddles that are sort of like a long handled pizza paddle that they use to squeege the water out of the rug.  It’s really something to see!  So, after a little while I made my way to the train station to find that everyone that had tried to get out of Dodge at 5:30 had been stuck in the train station until 7:30.  Meanwhile, I had some yummy Indian food a little vino and learned a thing or two about rugs!  I call that a successful adventure!